Our own Rob Bruce gives us some build up on the long awaited Balvenie Tun 1509 Batch 2, that has just hit our shelves in Loch Fyne...

So it has finally arrived. The follow up to the hugely successful cult classic that was Balvenie Tun 1401 is here.

But this time the ‘The Tun’, as it is lovingly known, (Ok, I admittedly I’m the only one that calls it that,) has come back bigger - four times bigger to be precise - and bolder - because it’s about double the price.

But to be fair, we are four years further on. The costs of raw materials, energy and logistics have soared - along with the global demand for our beloved spirit - so I’m really not comparing apples with apples…….or barley with barley if you prefer!

And with Tun 1401 reportedly changing hands for five times the original price, along with the hugely loyal following Balvenie has, the price is almost superfluous.

Anyway, based on the reviews to date, most seem to agree it’s money very well spent.

Forty two casks of Balvenie’s precious liquid, all housed in Tun 1509 for three months to marry together, have been used to create a whisky smelling of vanilla and orange, and tasting of mellow cinnamon and sweet blossom honey.

The online critics certainly seem to love it, so even a four fold increase in production and a hike in price won’t stop the 1509 becoming a cult collectable like its little brother 1409. 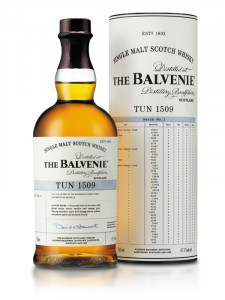